On Thursday, a new student, M., came in to the Writing Center for the first time. She had an assignment from her criminal justice class on the rule of law that she “just couldn’t start.” I sat next to her at the computer as she did the first thing: locate a definition for the rule of law. A Wikipedia article popped up; she pointed at it and said, unprompted, “Oh, I’m not gonna use that one. Anyone can write those.” So, she didn’t need too much help from me on research.

I also noticed, as our time together lengthened, that my usefulness to her was mostly in my presence, and in my occasional murmuring of vague questions like “Well… so… what do you make of that?” or nudges like “Yeah, write that down.” In front of her was a yellow ruled pad, which she kept turning to, writing note after note with a blue pen. 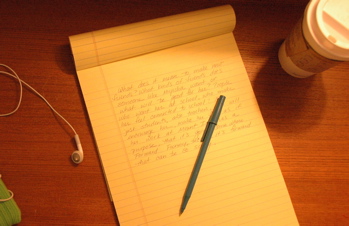 As she wrote, she spoke some version of what she was writing: “Okay, and next I want to say that the rule of law is how it should be, and not how it actually is.” And then she would write and so on, back-and-forth between saying out loud and writing. I sat there, tilting in my chair, content to watch a young woman fill a page and hear her think out loud. Sometimes Sarah, at the front desk and the only other person in the Writing Center at the moment, would overhear and affirm M., who at one point said, “This is so much easier than it was last night, sitting alone in my room and trying to write it.”

Near the end of the hour with M., she wanted to start typing her response to her instructor’s question about rule of law, and would I look over something else she had brought in, a short essay on her educational goals? I sat nearby at the table, with her draft and my pencil. The first few paragraphs covered territory I’ve toured before: Education helps you realize your dreams; Education gets you respect. Some biographical information at the end surprised me. Her parents and friends are trying to call her back home; they don’t support her desire and determination to get an undergraduate degree, head to law school, and be a lawyer. “I have to find new friends,” her essay says, in so many words, in the conclusion. I penciled in the margin: “takes courage.”

To start out – to get going anywhere – without a companion, well, who among us wouldn’t feel the vastness of what that requires? Writing alone, always moving forward into the unfamiliar… there’s only so much of that one person can manage.