In revising longer works, it’s easy to fall into the trap of endlessly polishing word choices and sentences, because they are small units that can be both held in the writer’s attention and worked on at once, and avoid dealing with the draft in its entirety.

That kind of fine labor, though, could be like running on a hamster wheel — it’s fun, it’s exercise, but you end up not too far from where you started.

On and off, for months, I’ve been working on an unwieldy draft of an essay. It’s too long — 8600 words — for the journal I want to send it to, which has a word limit of 5000. When I read the draft from start to finish, it feels complete to me and every word precious.

So, the only smart thing to do is undo its completeness, which I did. 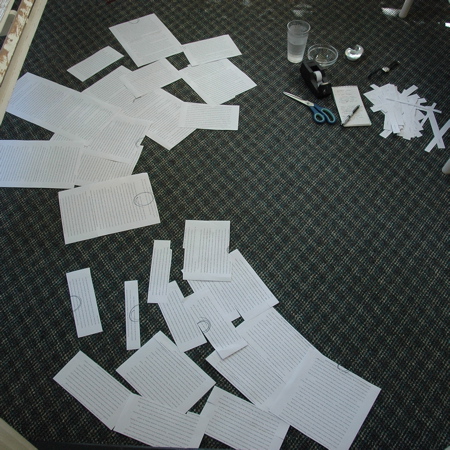 I cut it into pieces, based on a similar exercise I’ve done with students and on some remarks that journalist George Packer made to his audience at the Wesleyan University Writers Conference last June. About the structure of his own narratives, he has noticed that the “basic move is between scene and passage of analysis” and “sometimes both occur together.” In the image of my dismantled draft, the pieces in the grouping at the top are scene; the pieces that curve up from the bottom are passages of analysis and, for my purposes, reflection.

Yesterday I looked at each piece and sorted the pieces further: (1) ones relevant to my main idea, and (2) ones not relevant. This work went quickly.

Then I went back into the file for the draft, and I removed (and dumped into another document) all the irrelevant pieces. New word count: 5500.

I’m getting closer. Next step? I’ll lay those patches of paper out on the dining room table, and shuffle them around.