Chores to do. Walk to take. We took a break from one and went on the other. Jimmy was enthusiastic, but I had to promise the reluctant Grace that when we hit 20 minutes we’d think about turning around. 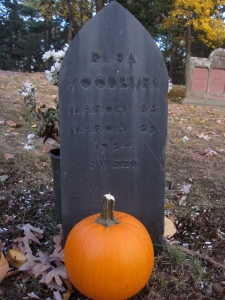 Heading to Allandale Farm, we cut through the beautiful Walnut Hills Cemetery.  There are enough paths and gentle hills to make it a decent walk, which we’ve done many times. I thought I had seen all the gravestones of interest. Today this knee-high marker caught my eye for the first time; the small pumpkin at its foot was a beacon.

Infants died for many reasons in 1924, as Elsa Woodbury did at only one day old. The mystery is who is bringing a pumpkin to her grave 88 years after her death. No doubt her parents are dead. Grace speculated that a living, younger sibling could have done it. I wondered about a niece or nephew. Somehow, though, the memory of sweet little Elsa remained powerful enough in a family’s collective mythology that she would get a pumpkin for Halloween, the only one we noticed, by the way, in the cemetery today.

Does anyone else have a story idea for this find?

—–
Photograph by Grace Guterman, at my request.