Sometimes, in one of my little fantasy conversations, I imagine saying to the phantom I’m talking to, “I am not a person who breaks things.” I imagine saying this not as a boast but as a deeply held commitment, a promise to myself: I will take care, I will not break. And when I say “things,” I mean everything that can be broken, like dishes, and promises and hearts, too.

But, of course, I am occasionally a clumsy animal, and I break things. Two hours ago, for example, I broke two snow globes.  This made my daughter cry. 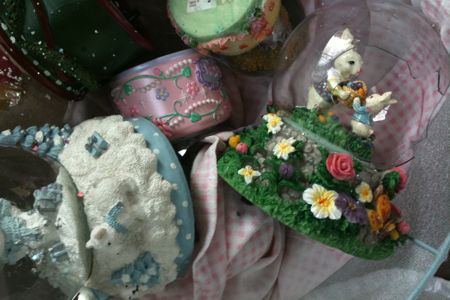 We were on our way to school. Lydia was riding shotgun, and Grace was in the back seat with her backpack, music bag, and a mysterious bundle wrapped in a fleece baby blanket. After I stopped the car in the drop-off line of other cars in front of the school, I reached into the back seat and tried to push this swaddled bundle closer to Grace, who was outside the car now and trying to figure out how to carry everything.

I got out of the car and mouthed an apology to the woman in the car behind ours. The woman nodded and winced in sympathy at my obviously distressed child. “Grace, what?” I pleaded.

Grace jumped back into the car and slammed the door. “I’m not going in! These are my favorite things in the world and you broke them!”

I got back in and drove the car to a parking space.  I inspected the basket of snow globes. They were nestled this way and that inside another baby blanket, now wet and glittered. I could smell the chemical, like acetone, that keeps the globe water clear.

Grace continued to sob and whine the terrible and angry sound of grief.

I said, “I’m sorry.” While I meant it, I also felt something else: the hunger to defend myself, to blame someone, even if it meant blaming my own child. Many things I could have said were running through my mind, as though I were testing them out: Why are you bringing these to school? Why didn’t you pack them carefully? Why did you have to bring so many? Why didn’t you ask me for help? It would have been especially satisfying to say this — I told you so — but that would have been a lie. I didn’t tell her so.

Still, this urge to deflect built inside of me. I imagined how delicious an outburst would taste and the relief that might come after yelling, after throwing back at Grace the tsimmis and tsuris she was unloading on me.

At the same time I was imagining the feel of this release, I was playing out the consequence of an outburst: an even more grief-stricken child, more tears, a terrible day at school, guilt.

In my dealings with other people, I have many times been called out on my tendency to pause in the middle of speech or in the middle of a game or even once when I was a juror on a criminal trial, driving my fellow jurors crazy with the time it took me to weigh meaning and possibilities and to vote “guilty” or “not guilty.” During one of my characteristic pauses, another juror, Toby, a basketball coach, even yelled at me, “You’ve got three seconds on the clock, Kokernak. Shoot the ball.” I surprised him by crumpling into tears and yelling, “This is not basketball! This is important!”

And Grace’s immense pain over the sudden loss of her well-loved things was important, too. My internal dialogue — which, I will admit, sometimes slows me down and locks me inside my own thoughts — gave me time to rehearse everything I might say and do and ultimately choose, I hope, the right path. I might break snow globes, but I do not want to damage trust.

“Grace, I am so sorry. It’s my fault, and I promise, I will fix this. Let’s go to school.” The day began again, tentatively. I brought home the broken things.

Snow globes, it turns out, can be repaired. 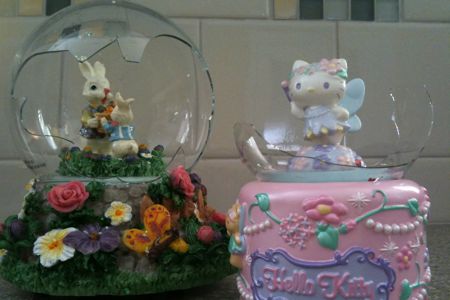 Update (July 19, 2010): I sent the broken snow globes to Toby Gentile and Bob Overholser, and a couple of weeks ago we got them back, beautifully repaired, right down to the little transparent hearts in the “snow” of the Hello Kitty piece. 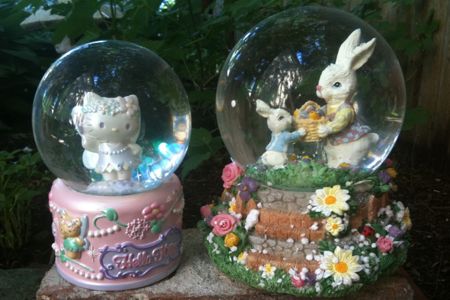 One thought on “– Fragile, dear, and broken”