Last night, I drove to Kendall Square to meet my friends Betsy, Sue, and Brandi for dinner at Miracle of Science. It’s the holiday break, so I haven’t been to MIT for several days. Through email, I have been staying in touch with colleagues, and I even heard from one of them that a recent student of ours had been killed on his bicycle at the corner of Massachusetts Avenue and Vassar Street, an intersection I know well and cross on foot at least twice a day. It’s busy; every vehicle and every person converges there.

I drove up Vassar Street around 5:50 pm and past the garage I typically park in. I approached the intersection, thinking of course about the accident and the student Phyo, who had been in the communications module of a chemical engineering class I’m involved in every fall. I thought about the last time I saw him, shortly after his graduation in early June ’10. He was still on campus, raising money for Camp Kesem by selling popcorn and doughnuts in the Stata Center. He had a warm, sparkling smile, and we enthusiastically talked about other grassroots ways of raising money — like selling popsicles on hot days —  and about his new job, which was about to begin.

“In my interview, they asked if I had any presentation experience, and I told them about my final presentation for the class, and they asked me to come back and do it for them. I did, and they liked it, and they offered me the job.” He looked happy and eager. Admittedly, he always did, and this was one of Phyo’s gifts.

I had the green light at the intersection, so I couldn’t stop and sit in the car for a few seconds and contemplate the accident. On the corner, I glimpsed a memorial: a white bicycle and some candles. I parked my car nearby so that after dinner I could walk back to the corner and stand closer to it. 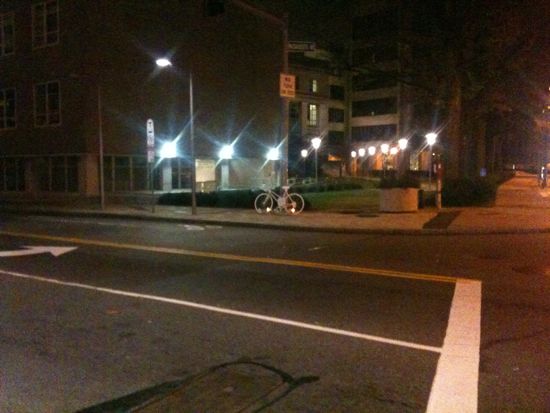 After a long dinner and dessert and walk with my dear friends, we embraced and parted. Over dinner, I had told them about the accident. As the three of them got in one car, parked on Mass Ave closer to Miracle, I said I was headed to the memorial. Brandi asked, “Should we go with you? Are you safe?” I smiled inwardly, not afraid of the neighborhood, and thinking it was ironic to be worried about strangers when trucks were a proven hazard.

Honestly, my feelings about Phyo’s death were almost dream-like as I walked back toward the Institute, and I was motivated more by curiorisity: What does the memorial look like? Who made it? How was it personalized?

I got to the corner, and, though there was little traffic, I waited for the pedestrian light to turn. Even from across the street, the novelty and beauty of the memorial made me smile. I thought, “How MIT!” It would not be enough for students there to leave some bunches of supermarket flowers on the sidewalk, which I see occasionally on the Boston parkways near where I live after a local teen dies in a car accident. It looked like Phyo’s friends had spray-painted a bicycle white, wrapped and taped its seat carefully in a white t-shirt, and lit several of those perpetual candles you see in church memorials.

It’s hard to know what to feel, or how to describe what you do feel, when someone you cared for has died, even though you knew that person not well, not for long, and not in an intimate or family way. The thing about being a teacher, though, is how much the act of teaching is endowed with love — a certain kind of schoolish love. And it may only be a one-way love, and it has its boundaries and limitations, for sure.

Still, as I stood on the corner, my toes just inches away from the flowers and the candles, I studied the bicycle, and I touched it, and at last I noticed the bicycle lock securing the bicycle to the post — and this bike lock really, really made me smile, although I was sniffling too — and this is when I finally and deeply felt sad, a real piercing of the heart, and I also remembered Phyo vividly, as though he were still a person and I had seen him only yesterday. “Oh, Phyo,” I said out loud to no one. 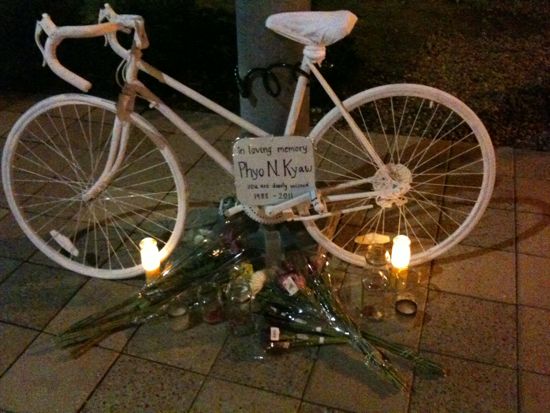 Perhaps the second-to-last time I had seen him was a few months before the time I caught him selling popcorn. He and I and his classmate Emily were rehearsing their final presentations (including the one that helped Phyo get his job), and we kept talking beyond the allotted hour, loitering in the hallway for a long time.

We talked about Emily’s habit of filling her pauses with “ums.” I suggested that she fill her pauses with silences. “It takes practice and some self-control, but it’s doable.”

The two of them — friends and conspirators — laughed.  “Yeah, like you?” They had noticed that my pauses, in speaking, were a shade too long, which I knew; they also told me that I sometimes touched my forehead when pausing, which I did not know. Emily impersonated me. I laughed. You know your students like you when they have studied your gestures, and you know they trust you when they can tease you openly.

We talked also about Phyo’s habit of turning all his declarative sentences into questions of sorts, with a rise in tone at the end. “To an audience, this might seem as though you’re tentative about your work,” I explained. “Unsure.”

“Not at all,” said Phyo, smiling. “Where I’m from, it’s a sign of the speaker’s respect for the audience to raise his tone like that, to show you care what they think about your work. I am confident of my work.”

I did not try to change this. As a teacher, I am always learning things from my students. Here was a different way to think about tone in public speaking. If we truly are a diverse community, then perhaps as audiences we should be as open to diverse tone, body language, and nonverbal cues as we are to other spoken languages and accented English.

Really, I only get to know my students so well and for such a short time. What they leave me with sometimes counts as Knowledge — transkingdom RNAi as a potential therapy for cancer, for example, which is one of the topics in that chemE class — and sometimes as insight, and insights so modest that they may affect only me. Whenever I hear an instructor comment on a speaker’s “up-talk,” however, since that conversation with Phyo, I think to myself: There is another way to view this. Perhaps up-talk is a signal of the speaker’s esteem for us, a kind of generosity. Not at all a flaw.

The thing about memorials, which rarely evoke the body of the deceased person, is how paradoxically present they make that person. Phyo, I thought to myself last night, your friends already miss you tremendously. Your parents, I grieve for their loss. How terrible.

And me? As teachers, we are privileged to be a part of our students’ lives at what we perceive to be the beginning. We optimistically picture a long, bountiful middle and shining conclusion. The end, if we even consider it, we imagine to be very far away and beyond our own endings. The story — the one I believe in — has been prematurely interrupted, and closed. 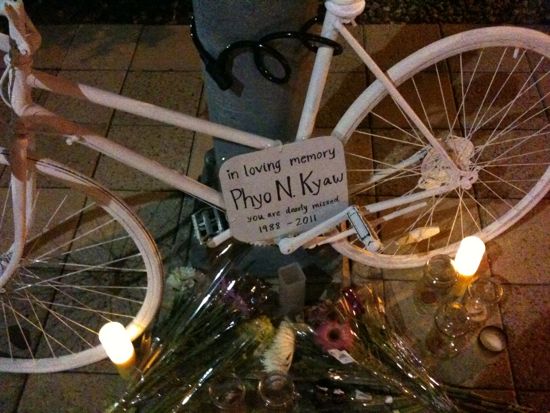 Update Jan 2: Found this story about the memorial, which apparently went up the afternoon of the evening I first saw it. Link.

11 thoughts on “No middle, no satisfying end”