Recently I’ve been thinking about boxes. I turned on the timer (30 minutes), opened OmmWriter (still love it), and I followed my thoughts from one to the next. Here’s the result, without edits, although I did add one link. 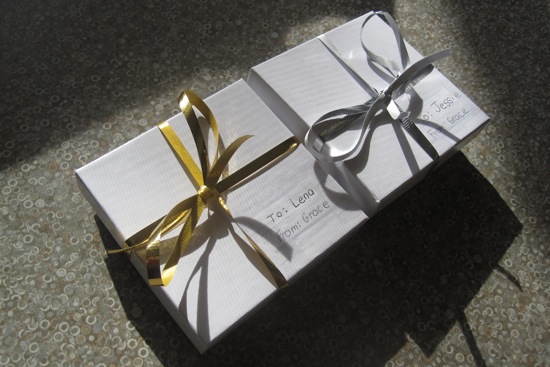 boxes by Grace and photo by me

When I was a child, I loved miniatures things: figuerines, the shoes that came with Barbie, safety pins. Once, at a town fair, I entered a raffle for a green-and-clear blown glass turtle. I paid 50 cents for my ticket and dropped it into a coffee can with a slot cut out from the smoky white plastic, and I hoped and hoped.  It’s possible I bargained with God, in whom I then believed.

I didn’t win that raffle, although I did win a “wash and set” (remember those?) at the town beauty parlor. I tried to trade this prize with the grown woman who won the turtle; she had gray, curled hair, and it seemed likely she’d want my prize even more. She said no. I still picture that glass turtle as it was displayed that day on a circle of mirror placed on the prize table.

I don’t remember if I liked jewelry or not, but I did like the boxes that jewelry came in: small, well made, sturdy, the lid close fitting. The box itself seemed as special as what came in it.

For a while I went through a period of collecting boxes: wood, ceramic, paper. They had to be small. Big boxes seem to not be collectible.

And yet, among the Kokernaks, who all share a love of putting, throwing, or giving surplus things away, there is an appreciation for what we would call a good box, as in, “Keep that. It’s a good box.” Jimmy too says this.

In the spring of 2003, when I was in graduate school and taking a course on teaching writing and visiting classrooms to observe teachers at work, I sat in on my friend Lisa R.’s English course at Wellesley College. That day the students were studying and discussing a Shakespearean sonnet. In her remarks, Lisa revealed how much she herself loved sonnets, “a whole argument packed into fourteen lines.”  Shakespeare loved them for this too, she added.  Some other scholar, she told the students, referred to the sonnet as “a tight box.”  I loved that image, and it gave me a new way to think of sonnets and all formal poetry.

What can one do — how much liberty can one take, what can a writer or person — within the constraints? The thought gives me shivers.

In the attic I have about four containers of my books, files, and even my bulletin board paraphernalia  from my time teaching writing at Simmons (2004-2006). Are they like coffins? I contained my grief over the end of that time by boxing up the things. Perhaps.

In the basement, there are three boxes of my papers that need to be sorted through and filed. On the side of each box I neatly wrote: Jane’s Stuff. Not specific. I have a feeling that 90% of that stuff is garbage — thrown into the boxes when I cleaned out an old desk that was going to Goodwill — and only a bit of it stuff I might actually want, like my Talking Heads CDs and the letter Grace got back from Obama when she wrote to him a few years ago.

Last Sunday in the New York Times, in a piece on how awash our lives are with social media, Sherry Turkle conveyed that what we have lost, because of the ubiquity of the Internet and the display of personal information online, “is a healthy form of compartmentalization. We can no longer box up aspects of our home life when we go to work or tuck away distressing episodes from our past. Never mind ever moving on.”

But, yes, the loss of the ease at boxing up the pieces of our lives when we move from one sphere to another creates psychic and attentional burdens. When I’m at work, I want to be there, and I want to be the Jane I am there.

Boxes are comforting in how they define a space, and by defining a space give us room to be in that space. (I do not think Foucault would go along with this.)

In my mind, when I don’t want to think about something (for example, because it’s upsetting or distracting), I deliberately put it into a mental box. Really, that is my metaphor. It is calming to picture that box — cardboard, unmarked — and to see the thought go into it, and to see the four flaps on the top close.

At night, after I turn off my reading light and turn on my side, I go into my imagination and I take out a box — there are many, all unmarked — and it is something I want to think or dream about. (My sister Emily and I, when we were well into adulthood, discovered that we mutually had developed a habit, as children, of doing something we called “starting a dream.” As we put our individual heads on our pillows at night, we would conjure something we hoped to dream about all night. We deliberately imagined in consciousness what we wanted to continue when unconscious.) So now I think of this as the evening box to be opened. I try to make it pleasant and also open-ended.

All of my kids, when in fourth grade or so, experienced a long period of anxiety. Of course, we sought professional advice. For one child, the therapist recommended a Worry Box: during the day, when things occurred to the child to worry about, the child could write them on a slip of paper and put them into the box. The box would keep the worries safe but also keep the child safe from the worries. A different therapist for a different child recommended the Worry Hour — a time during the day, not night, to take out, consider, reflect on one’s worries. Eleven o’clock at night is not a good time for this hour. Choose four o’clock in the afternoon.

At night, take out a little Dream Box. In it, find the glass turtle, your best friend, secret wish, your hoped-for adventure. Open that instead.

One thought on “Turtle dreams and other boxed things”