I didn’t win the race; I won my race.

Lydia and I ran the B.A.A. 5K along with 6,000+ other runners, our second race this year and my second race ever.  On the train ride back to our car at 9:30am, having done what we each set out to do — Lydia improved her time and I ran the whole route without walking — Jimmy asked me if this race felt different than the first. 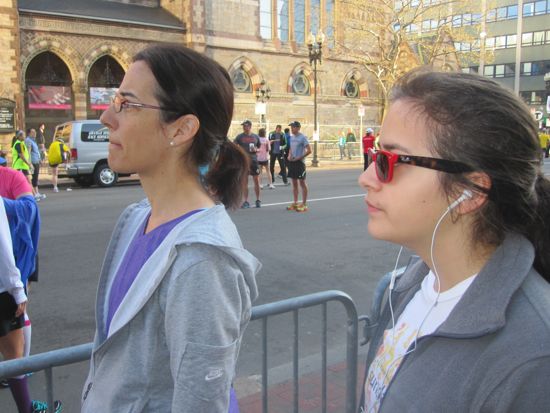 Before the race, Jane and Lydia contemplate the finish line.

I enjoyed this race more. There was only one hilly patch (near the State House), and my mental resources therefore were not focused on the stamina and positive self-talk needed to get up yet another one of the several hills in the South Boston 5K. My mind was free to think other thoughts.

After the start and as we were trotting up Boylston Street, I noticed a lot of women running past me in lululemon tanks with the ruffle down the back and several sporting lululemon running skirts.  What, by the way, is up with skirts on runners? Do they hide something? Does wearing one communicate a dichotomy in identity? I’m pretty; I’m strong. What’s wrong with simply I’m strong?

Lineup gathers on Boylston Street in front of the Boston Public Library.

Speaking of sartorial runners, before Lydia surged ahead I pointed her attention to another mother-and-daughter pair near us who were in full makeup, foundation included, with hair carefully blown dry.

All those overt beauties ran past me along with many other runners who were fast starters. My ego felt vulnerable in the first few blocks. I was determined to pace myself, and yet it’s a little disheartening to be passed by just about everyone. I had a talk with myself and bolstered the self-esteem.

At the first water station near Park Street, I grabbed a cup from a volunteer. By this point I felt happy and looked ahead and around at my fellow humans, all bobbing together, some talking, and I wondered if non-domesticated creatures (like ants and fish and wild horses) had ways to play some version of sports together. Do they ever scurry or run simply to scurry and run? To be part of a human endeavor like this seemed to say something about our capabilities beyond survival and purpose. Athletics may in some way be like art.

I did see a lone woman, in her B.A.A. 5K yellow race shirt (I didn’t wear mine), cut a big corner off the official route by running through the Common instead of around it. So much for the herd.

Down Beacon Street and after the State House, I mulled over a remark Lydia had made when I had said I wasn’t in competition with anyone. “But Mom, you are. You’re in a race.” (Touché, daughter.) Yet I doubted I was fit enough to win anything.

Then I recalled a remark my friend Lisa R., a literature professor, once made to a student grieving over the loss of a fellowship, who asked her professor how to be successful. “Be the last one still standing,” Lisa said rather cynically. On Beacon Street, I decided that this could be an optimist’s mantra — my mantra — and a goal could be to get ready for the next age category of racers. It seems, by looking at race results, that there are dramatically fewer people in every decade group. I’m not going to make much headway in the 40 to 49 year old female category where I belong now, but I might someday make headway in the 50 to 59 year old female category. And look out, 60 to 69 year old females: it’ll be me and about 30 other age peers racing when I get there, and perhaps then I’ll have a chance.  If I’m still running in my 70s, that could even be newsworthy:

Ahead of me, I saw an old couple — a man and woman in their 70s — running vigorously and steadily together, and I decided to make them my pace car.  I made a mental note to tell Lydia that we need to run one 5K every month to stay on track.

At the corner of Beacon and Arlington, many people started walking to catch their breath, including lots of young people with those fancy compression socks. In my mind I scolded them: You’re young: run! I ran by them, some in those skirts. (Alright, alright, I’ll own up to some competitiveness.)

I saw a middle-aged fat guy running with his 20-something fit son. The son was coaching his dad and, in doing so, holding himself back. I wanted both to praise the young runner and say to him, Go! Your father will be okay. I suppose on another day the son will have his turn.

One of the 4,700 runners who crossed the finish line in front of me. A costume may help.

In the last kilometer, I decided to work on my form and my runner’s face. “Don’t runners always look miserable?” the woman who cuts my hair once asked me. Feeling good, I consciously focused on the position of my upper body and arms. I smiled at the volunteers at the second and final water station. “Thank you!”

The finish gate — the same one that the Boston Marathoners would cross on the following day — was in sight. I passed my pace couple. I straightened my body, like there was a string from deep inside my gut, vertically through my center, and out through the top of my head pulling me up, and I quickened my pace. I passed some skirt-wearers and some compression-sock wearers. I knew Lydia was way ahead of me, and I hoped she beat her own time. I leaped past walkers.

After the race, Jane and Lydia sport their participants' medals.

Thanks to Jimmy for taking photographs and Grace for coming along.

11 thoughts on “The tortoise wins her race”