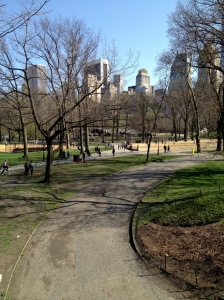 On Monday, April 15th in the afternoon, Lydia and I were walking through Central Park from the Guggenheim down to Columbus Circle. It was the end of a two-day trip to the city to see a college that Lydia is interested in applying to.

I kept looking at my phone because the walking paths curved here and there, and we followed them and yet still wanted to be headed generally in a diagonal across the park, so I needed the Google map. In the Ramble, I got a text from Jimmy:

There appear to have been explosions at the finish line of the marathon. We are at the arboretum, far away.

I did not know enough to worry, and I ignored the text. Maybe “explosion” meant firecrackers launched by naughty kids.

Lydia got a message from a friend about the explosions, and she followed up. Perhaps she is more easily alarmed than me, by personality or age. “Mom!” she said something like this, urgently, and conveyed the seriousness of what had happened.

Our walk to Columbus Circle — to go to Whole Foods to get something to eat on the train before we headed to my sister Emily’s office and then Penn Station —  lost its power. The beautiful spring day seemed to be happening to other people. Lydia even remarked, as we passed New Yorkers, that they probably didn’t know yet.

I did stop to take this photo (above) on a bridge that looked over a playing field and what is called Central Park Running Path, according to the geographic locator in Instagram. Lydia discouraged me from taking more, claiming that our moment for picture-taking was gone.

I didn’t know what I felt: distracted, there-but-not-there, worried about our travel plans.

When we got to my sister’s office near Penn Station, we heard more. We watched videos on our phones and my laptop. We discussed. The word “amputations,” more than any other detail, provoked whatever it is I felt, and those feelings I could not name.

At home, after a train ride back to Boston that was delayed almost two hours, I noticed that Grace seemed the most rattled of all of us.

The next day, Lydia was all of a sudden headed back to New York. Her chorus had been invited to sing for Boston on Good Morning, America. She and all her singing friends slept only a few hours that night. On Wednesday, they performed “In the Name of Love,” got back on the bus, and performed twice that afternoon in Boston. Already, a memorial service for one of the three people who died in the bombings was being held.

On Thursday, her group sang at an interfaith service at the Cathedral of the Holy Cross. Obama was there, Deval Patrick, and the city’s religious leaders.  It was Mayor Menino’s words and posture, however, that moved me most as I watched on the television because of their plainness, their lack of art.

Lydia was the only one of us who was actually present at these events: Grace, Jimmy, I, and Eli (in Vermont), experienced them only through Twitter and the constantly updated news.  It must be exhausting — and I think Lydia was — to be in the throes of heightened emotion over a period of days.

I did not experience or feel this intensity, this rawness. I had no role. I watched from a distance. That I held my phone in my hand, or watched the tv in my basement, did not “bring it home.” I was home, but home looked okay to me, same as it ever was.

On Friday, April 19th, we sheltered in place. I looked out the window at a mild spring day, and what I observed was inconsistent with the words of firm caution spoken by public safety officials. A police officer at MIT, where I work, had been killed by the suspects. Another officer, injured. One of the suspects had also been killed, in a confrontation with police, although later it seemed he had been killed accidentally by his younger brother, the second suspect.

Everyone killed so far, young.

And later, about the remaining suspect:

He is the age of our students, of my son Eli. How stupid, and what a waste of his own life.

More, to a friend:

There seems to be this set of emotions that are being reinforced — in the news, online, among friends — as appropriate for the events of the past week. The murders; the violence; the manhunt. It is assumed that we all feel the same way, some measure of grief and resolve.

It is assumed, therefore, that we all know what we feel. I do not know what I feel or, at least, not fully.

Just a few weeks ago, I could have been considered, as a lifelong Massachusetts resident, what is called a “Masshole.” I first heard this term a couple of years ago, when a student of mine from the Southwest said to me, “You’re not like all the other Massholes.” This was supposed to be a compliment although, as a native, I felt offended for the people I share a commonwealth with.

Now, suddenly, I am among the “tough and resilient” people of Boston.

Would not any group of people who had experienced an attack, and lived, be considered “tough and resilient,” even if they were from Tucson or Santa Barbara? I mean, no one would say, “Oh, you sun-loving snowbirds, so delicate, so temporary.” No, the people of Tucson also would be called tough and resilient.

Yesterday I discussed this with my friend James. We talk via a Google Hangout once a week about our writing; we also use the time to catch up and drink coffee together. Boston was a topic yesterday. I knew I could tell him about the pressure to have this collective experience of grief — and anger — and resolve. I still feel startled. I am sad, too, imagining the families who lost their young people; I am sad imagining the victims coming out of surgery, being aroused back into consciousness, and findings out their legs are gone.

And I am sad, too, for the stupid young men, especially the younger one, who planned and carried through the bombings. They ruined their own young lives — one is dead — and this waste is another loss we must bear. I knew I could tell James this, and he, as a fellow educator of college-age men and women, would understand.

There is an absence of sympathy for the killers in the press; perhaps some journalists do feel it, but it may not be an arguable position for a newspaper to put out there. I do not believe that the remaining suspect — a 19 year old terrorist/murderer — “needs” my sympathy. He may not even want it. I do not know him, so I do not know.

It is impossible, however, for me not to feel it. This may disqualify me, therefore, from participating in some of the collective experiences of grief and anger.

A therapist once told me that anger and sadness are twin emotions. Anger is often directed outward, and sadness turned in.

Sad, somber: I am at least that, for all of the dead and ruined young lives.

5 thoughts on “All the dead and ruined young lives”