If a person gets the urge to grow something, she can do it anywhere there’s some light. A pot or a patch and time to tend it is enough. Last week boingboing linked to a post on Kirainet about gardens on little public corners in Tokyo. Here’s one: 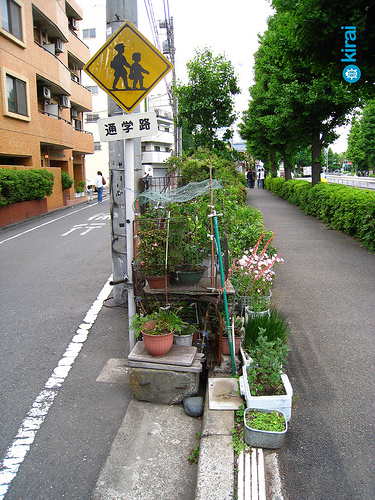 The anonymous gardener appropriated some unused public space — just a sliver — and made something both useful and beautiful in it. I probably should say that the gardener is making something there; gardens change every day and are never finished.

The sliver garden made me think about a story an old boss once told me about a friend of hers, who had a fantasy (if I remember this right) of buying and restoring a big, old waterfront home in Maine. This friend lived in some other, non-Maine non-old place, in a suburban development, not too far from her job, which she liked and which financially sustained her and her family. Yet, this fantasy kept pressing on her: an out-of-reach, vivid Someday Dream. So many aspects of it made it unattainable in the present: her like and need for the job, lack of money for a second home, lack of time and skills to do the fixing-up, a spouse’s lack of interest in the same project. The Someday Dream floated farther and farther from her reach.

Finally, someone asked this woman who was filled with longing, “What is the feeling under the fantasy?” The woman, at first, did not seem to understand the question, and she answered with a more specific description of the house she dreamed of and the place she pictured it in.

Her interlocutor explained that she wanted the woman to examine the more pure feeling underneath the specific details. This was (and is) a harder question. After a long pause, the woman finally said that she wanted to take something old, with a history, and make it livable. In answering the question, the woman herself realized that she didn’t have to live in an 11-room, white, black-shuttered Victorian in Kennebunkport to get close to that feeling.

It’s funny: I don’t remember the exact outcome of this story, but I do remember that, by figuring out the feeling underneath (and I love that the feeling is under the fantasy, supportive like a foundation, or hidden like a cellar), the woman made some change in her life that gave her access to the fantasy. Maybe she moved to an old house in her town. Maybe she bought old furniture — stuff with the history she was after — and restored it. What’s important is that she figured out a way to give shape and actuality to a dream of something longed for.

Last fall, on the afternoons that I dropped Lydia off at her chorus rehearsal, I regularly walked through the community gardens on East Berkeley Street in Boston. On a sliver of land between the street and a public alley behind townhouses, there’s a double row of fenced and gated outdoor rooms, each about 10 feet by 10 feet. There are a few double lots.

Many of the gardeners maximize their spaces, growing greens and vegetables in the ground, flowers in hanging pots, and squash vines on the fencing. Such parcels seemed like farms to me, and I’ll bet they are to the people who cultivate them. 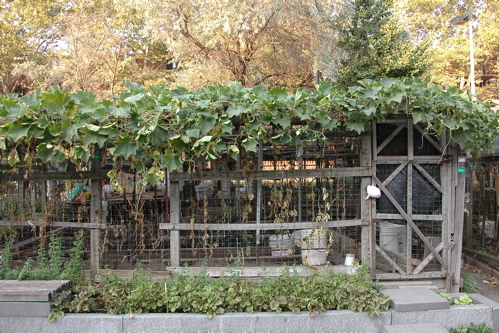 Other gardeners trace paths inside the fencing and fill them with stone or broken pottery. I noticed ornaments and signage. Some gardeners post photographs, protected in acetate sleeves, featuring the same garden in another season, creating a weirdly fascinating, double view of the same location. A few gardeners have turned their allotments into sanctuaries with grasses, torches, wind chimes, and seating.

Whether farm- or patio-like, do such places give all their proprietors a feeling under what started as a more specific fantasy? I imagine the person or pair that arranged this tableau:

This is what having some of what you want looks like. As I stood there, I felt it, too.