Last summer I started and made substantial progress on a draft of a memoir/essay about having a crush on one of my Wellesley College professors, *not* having an affair with him, and reading many years later of his death from prostate cancer. A first excerpt is here, and another one is here. (There’s also a reflection on writing the essay here.)

Then, I put the essay aside for the winter and did other things and wrote other pieces as well as lots of comments on student work. 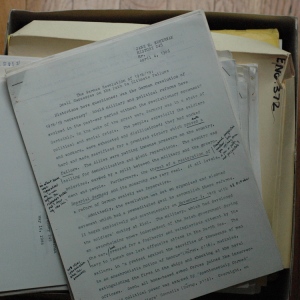 Resolved to finish the draft, I picked it up again a couple of weeks ago. I hit a snag when I felt I had exhausted my memory of that time in college. Searching for something concrete, I opened up my college archives (a green cardboard box) and found three papers I wrote for that professor.

Ah, evidence. It helps. In writing about those papers and his comments, I found my way back into the essay and finished the draft. It’s funny how artifacts function, however. While they are more lasting and stable than memory, our interpretation of them is often — usually — slippery.

All that I have left from Mr. K’s class (History 245) are three papers I wrote, typed, handed in, and got back with his handwritten feedback and grade. These are my only concrete artifacts of my time in that course. Who knows, though? Maybe in the College Archives, or in his own papers, there are records of that course from that semester: a syllabus, a grade book, his own notes if he kept them. (All teachers must keep some sort of notes.) But this is all I have and all I’m willing to put my hands on. There will be no heroic effort — or, no detective effort — to find anything else beyond what I have.

So I read them and made notes on my findings in a research notebook. […]

As evidence, what do they show? Before I read them, I was sure that my meeting with him [the one described in the essay, when he invited me to meet him outside of school “for a beer or something”] occurred after the first paper, the only one I got an A on, because I remembered that, on the basis of his reading of one piece of my writing, he had deduced that I had a “natural talent” for history. In my recollection, it seemed that his estimation of my work fell dramatically after that, when I failed to respond to his, er, invitation.  Indeed, just looking at the grades — first paper an A-, second one B/B+, and third one B+ — there is a slight trend that suggests a drop-off in evaluation after the first. However, having read those papers, I can also say that those grades are pretty consistent with the actual qualities of the papers. The first one IS the best paper. And his comments on the papers, along with the grades, show that he was an engaged reader and teacher. He doesn’t just stamp a grade on the paper and justify it. His comments teach history.

My favorite paper is the second one (“Women’s Family and Employment Roles in Germany’s Inter-War Years”), even though it is, in his estimation and mine too, the messiest and weakest. Now I’m its reader, though, and in it I sense the writer — 21-year-old me — most personally engaged with the material and most struggling to enter the conversation with my sources: I respond to them, I interrogate them. I even use the first person: “I think.” It’s not a polished paper, but it seems to have the most potential. However, it’s a final version, not a draft. (Draft and revision were not taught then.) His comments, if this had required a revision, would have helped me turn this into a better product.

What, then, the function of his feedback? Perhaps to enter into a conversation with the student, about her topic and ‘doing’ history in general, but a limited conversation. The paper stopped here, and the conversation — between this student and this teacher, anyway — stopped at the end of the semester, for good. The student’s next teacher, unwittingly, picks up where the former teacher leaves off, and the student has this ongoing intellectual discovery and progress, which is spread among many of her interlocutors. But those interlocutors do not have a sense of the student’s developmental coherence as the student does. And that seems to work for the student and how it should be — better many guides than one single one. Maybe being in school is the macrocosm for writing a scholarly paper — a student is immersed in the discourse, one voice among many voices. If it were just one:one voice, that’s not discourse. That’s a relationship. An isolated and isolating one. Perhaps.

There’s something attractive, though, about that exclusivity. For the student, if she were to cultivate a special relationship with a favorite teacher, she would be as though chosen. (“Fished,” as Toshika once said.) And she would experience her development as hand-crafted by a master. If she admired him (or her), and she were in a relationship with him, then she would feel her development to be in line with his greatness. She would be coming into being in his image, in a way.

That must be really attractive, too, for some teachers, and especially males ones. (Why do I think that?) Or, especially egotistical ones. To be in love with, or at least lust with, someone who looks up to you, who not only wants you but wants to be with you and even might want to be you, that’s flattering, too.

Mutual flattery, that’s what these educational crushes and romantic/sexual relationships are about. Rather than mutual reality.

But my relationship with him remained strictly pedagogical, even though my imagination — and perhaps his — had constructed an alternate universe in which it was romantic, sexual, and spontaneous. Our conversation ended.

Here’s something, though, that I wrote in my research notes as I reflected on my reading of paper 2, the one I found most compelling. I see that I’m disagreeing with part of his end comment on my paper:

Whoa — how can he say that the nation’s economic insecurity was “independent of women entering the work force,” when almost half of women age 15 and over were employed in 1925 (according to my paper)? It’s almost like saying women were non-significant as a factor.

If he were alive, it would be tempting to go back and argue this with him, and try to discover if, at a women’s college and feminist institution [like Wellesley], he was uncomfortable with this kind of analysis.

Interesting that I am tempted to go back and continue the conversation. He’ll never know this — he’s dead — but maybe that should be enough, as a teacher: that you are a participant in this important conversation your student is having and you should trust that your small role is significant enough. I mean, here’s a conversation that was no doubt meaningful at the time and that has persisted beyond the grave. That’s a legacy.

I find no hidden meanings in any of his comments to me. They are really teacherly comments on a student’s paper. It is funny, though, how it is possible to stretch and interpret a double meaning in the last sentence he wrote on my final paper, which is the last sentence he ever wrote to me: “The last two or three pages are far too sketchy and show little relationship to the opening.” That last line is an appropriate remark on the conclusion of my paper. It also strikes me now as a commentary on my emotional progress in that course — the end shows little relationship to the opening, when I was full of ardor for him.

In my memory of him and this class, I have a sense only of having lost my ardor for him and his subject and that he, in turn, lost any he had for me. Maybe that was true. It would be possible, then and now, to read that final sentence as a signal of his disappointment in me and my potential… something. (Potential as a historian? Potential as a lover? Both.)

Beyond ardor now, I read his last line dispassionately and see it simply as a teacher responding thoughtfully to an interesting yet problematic document and its writer.

That’s what’s so hard about interpretation. Although based on what we call evidence, it is oh so incomplete. At best, a guess.