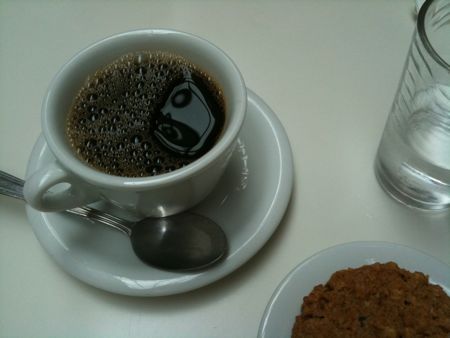 In 1992, during a hospital stay after my diagnosis with diabetes, I was faced for the first time with a meal that, at that time, was institutionally considered nutritious: undressed turkey, steamed vegetables, a boiled potato, diet Jello. No salt, no butter, no sweets. Worst of all: no caffeine in the coffee.

Feeling all hope bleed out of me, I implored the dietician, “Could I just have one cup of real coffee? One?” (Insulin, I could deal with. But a life with no coffee?)

“Honey, have as much coffee as you like,” she said, to my great relief. “Everyone needs a vice, and this is not such a bad one.”

That’s become almost a mantra for me, and I’ve embraced coffee like a maniac. Turns out, though, it may be less a vice than a health virtue*:

So now I might be looking for a new vice, one that tastes as good.

—–
Picture-perfect coffee drunk by me at b espresso, Toronto, in August 2010.

8 thoughts on “The case for coffee”