Last night Jimmy and I went to what’s called a drinks party and, to our relief, enjoyed ourselves. I realized later, after several good conversations, that what makes me an effective tutor can help me get through challenging social situations. Or vice versa. 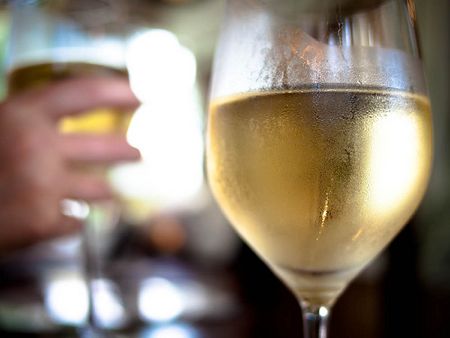 Why are cocktail parties challenging? I mean, I may not be attention-hungry, but I’m not shy.  Here’s the problem: so many people, no defined role for me, and no structure.

If those are the conditions — and they are for most parties, except for baby showers which are usually rather annoyingly structured around “games” (and those are intentional quotation marks) — then a person must have a strategy for dealing with the conditions. Otherwise, the impulse is to hide in a corner with the one person you know, clinging to that corner as though it were a berth and you a little boat afraid of being battered by the open sea.

And just as the secret to being a good tutor does not involve being drunk on the task, the seven secrets to party-going success that follow do not involve drinking half the bottle in the first 10 minutes.

1. Break it down. We arrived to the party fashionably late by 30 minutes, not by design, but because this was in Boston’s South End, where a non-resident must circle 10 blocks three times in order to find an empty spot marked “Visitor.” Already, there were more than a dozen strangers clumped in pods around the living room and den. Twelve strangers — yikes! I can’t talk to 12 new people at once, or even stand in their midst, unless of course I’m at the front of the room with a piece of chalk in my hand or seated around a conference table. Solution? Like any problem, break it down into small parts. Zero in on one or two people set off a bit to the side and approach them. “Hi, I’m Jane,” is a good-enough opener, along with an extended hand.

In my view, the break-it-down strategy is almost foolproof, and so much easier to meet one or two strangers than to insinuate yourself in a large, cliquish group of six or more. Only once has this ever backfired, when I was totally alone at a pre-conference “mingler,” and I sidled up to the only other solitary person in the room, an old man, who turned out to be from Scotland, named Andrew, and an incessant, selfish talker who bored me for an hour until finally, FINALLY, the dinner buffet line opened, and I had hunger as an excuse to break away.

2. Ask good questions. When tutoring a student in a writing center, usually the first question I asked was this: “What brings you here today?” As a tutor, I used this question to break the ice and to get the student to be the first person to offer a topic for our conversation. (An answer to “How are you?” never shapes a conversation. I pretty much hate the how-are-you question.) A good first question, which totally works in the cocktail party situation, is this: “How do you know our hosts?”

First questions are not enough! There must be more. I found these last night to yield rich and surprising answers.

3. Insist on follow up. As I do with students when they give half a good answer, to a fellow party-goer who replies to a question with only half the story, I say, “Please tell me more about that.” I am sincere. I want the complete answer that reveals detail, and if I have to coax it out of someone, I will. Last night a couple told us that their oldest son is at a college in Florida I had never heard of. So I asked them to tell me more about the college, which they did and in a way that made that college seem distinct and special. How they described it also reminded me of my previous work at Mount Ida College, which I told them about.

4. Listen, and listen more. All answers are potentially interesting, so I try to be open to any response I might get, from either a student or a party peer. Openness and attention are key. Often, from students I get answers that seem to be dead ends: “I hate this assignment,” or “I’m not a good writer.” To such a student I have said, “Well, tell me about your experience with this assignment [or as a writer].” Such a student would continue to talk, and a richer story would be revealed.

Just as I don’t ever want to insincerely try to convince a student to like an assignment or adjust her attitude, I don’t want to dismiss an answer by a peer that might be hiding a more complex story. Last night, a woman about my age told me she was a housemom (her word) trying to figure out, after years of dedicating herself to her children, what to do next. “What are you thinking about?” I asked, and she told. To be invited into someone’s thought process, in my view, is an acute pleasure.

5. Reveal something. As a tutor and interlocutor, I do more than ask questions and listen. I talk. Last night, for example, I talked so much more than I normally do in two hours that around 9 o’clock I started croaking. (Good thing I’m not a singer.) When I have tutored students who, for example, complain about their difficulties in getting started, I can reveal to them how difficult I find starting. We can then brainstorm or share ideas for getting a project off the ground and writing the first word.

Revelations don’t have to be confessions to be meaningful. It can be so touching to learn, when meeting a new person, that she misses her hometown, or that he idolizes his older brother. I told someone last night that I worry about my kids’ obsession with video chatting, and she and I had a brief interesting talk about a generational shift that was balanced, funny, and yielded insight.

6. Move on. When I first started tutoring, I let a student take up as much time as I had, and I didn’t cut them off at a half-hour or hour mark if my calendar was open beyond that student’s appointed time. Only upon reflection do I realize that this leeched energy and urgency out of the tutorial conversation, which may even have leeched energy away from the writing project itself. At a party, it’s good to stop a while with a person or two and have a sustained conversation (20 min?) and then move on, or allow them to move on gracefully. Sure, it’s easier in a lazy kind of way to talk to the same people all night — it’s comfortable — but it saps energy from the party overall, and it may lead to missed opportunities. In the last 10 min of last night, Jimmy and I were introduced to the hosts’ next door neighbor, and somehow we ended up talking about Porter Wagoner, and Jimmy told me and the neighbor about a dark yet forgotten PW album called “The Cold Hard Facts of Life.” When you’ve lived with a spouse or partner for 20 years, you think you’ve heard everything he has to say, and then he surprises you. Such a conversation would not have occurred if we had stuck with the first two people we met when we walked in the door last night.

7. Be yourself, and don’t worry about it. Also when we walked in the door last night, we both felt a little dazzled. Beautiful townhouse. A home with a bar set up, not just a cabinet over the fridge in the kitchen like us. People dressed with a bit of sparkle. Were we cool enough? Were we even qualified to be at a drinks party?

Jane, you know how to talk to people. Your clothes are fine. Let go of worry, and have fun. A little internal pep talk in stressful situations can help a person get over the initial impulse to flee. One must sometimes make mindful commitments to seeing through what one might resist or even fear.

I feel this way, too, every August, when the great big cocktail party that is the semester looms on the horizon. I fear the sea of faces. I fret about the clothes I’ll wear on the first day. I wish I had one more week to get ready. I wonder, Do I even know how to teach?

And every year I have to go through the mental exercise of reassuring myself — the self that doesn’t quite believe it — yes, you are ready. Yes, you know how to teach. So I begin, a semester or a cocktail party, and somewhere in the middle I forget my resistance or self-consciousness and I realize that I’m doing it, and although it may be hard, it’s also a lot of fun.
—–

Photograph: “Conundrum,” by Robert S. Donovan on Flickr via creativecommons.org