This is the fourth in a series of posts, called “A Writer’s Dozen,” on texts that have been important to me as a writer. 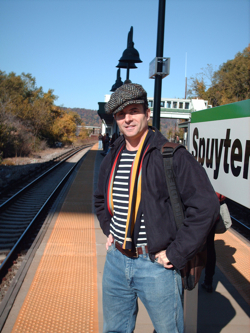 When he was in his early 20s and struggling to get started as a songwriter, Peter Selgin was attacked by a black Labrador retriever owned by the woman for whom he was apartment sitting in New York. The dog chomped into Selgin’s left wrist. He underwent microsurgery to address significant scarring around the ulnar nerve that affected feeling in and mobility of the hand. Results were minimal.

This event is described in his essay, “Confessions of a Left-Handed Man,” which is the centerpiece of a new book of essays by the same name. I first read this essay in Best American Essays 2006.

Always a left-handed artist and writer, Peter Selgin knew at age 25 that the full manual dexterity of his dominant hand would not return after the attack and surgery. In the essay he recounts his attempt to train his right hand, which felt like “trying to sing with [his] fingers holding his tongue,” to do what his left hand had always done for him. Around this time he also broke his leg. One night he walked on crutches to the East River with thoughts of killing himself. He had always been the left-handed boy — had identified himself as that — and the mirror opposite of his twin brother George, a right-handed boy who became an economist. At the river that night he had a “good bawl” and “hobbled back” to his room.

Twenty years later, he wrote the essay from a point in time he no longer felt that his left-handedness had any special meaning. It simply was. Furthermore, he continued to write and make art with his compromised left hand. The work he made before and after the injury, though, have “nothing in common” with each other. He calls his style “naive, even primitive,” and he asserts that his “lack of dexterity has freed [him] from glibness, which in turn has delivered [him] from the temptation” to show off.

Even though Selgin’s theme for his essay is humility — he says that, for an artist, “to master humility” is as important as mastering the techniques of his medium — for me, the lesson is about limits that we cannot overcome, that we must work within. There is nobility in this, and necessity, once the sorrow passes.

His limitation is physical. I do not think that my having Type 1 diabetes and surviving on insulin has disabled me in a noticeable way, although it is a project managing it. And yet there are realities of my life that recognizably limit what I imagine or dream of doing.

It is tempting to feel sorry for one’s self, to stand along the East River at night and have a good bawl about what is over and past: vitality, dexterity, leisure. These qualities, when lacking, seem to be the very ones we need in order to get or do what we desire. The longing for them may be acute.

What Peter Selgin’s essay helped me see, though, is that I did not need to bemoan or even romanticize the limits of my life; they simply are its conditions. These conditions do not stop what I want to do, although they do change life, sport, and art.

If I said, however, that I had permanently adopted peace of mind about this I would be exaggerating. I must remind myself of Selgin’s humility, and the imperative to accept what cannot be fought or restored, again and again.

Up next in the series: An academic article by Gopen & Swan (1990) on structure in prose, one of my favorite writing topics and concerns.

One thought on “Writer’s Dozen: Peter Selgin and Limits”