It’s winter break, and the MIT community offers weeks of workshops during its Independent Activities Period, or IAP. Some are brief, some occur over days, some help participants build work or academic knowledge, and many are just for fun.

This week, I went to the MIT Libraries’ introduction to bookbinding workshop. To get to the location, I followed a series of signs that began buildings away. In the library, the signs took us into the basement, through the rolling book stacks (‘wait, there’s something behind here?’), into a far corner, and finally into a room which opened into clinical brightness: the Curation and Preservation Services Lab. It was like the secret room in a secret-room dream.

The lab is a model of both warmth and order. The space is about the size of two undergraduate teaching laboratories (or, maybe equivalent to three medium classrooms hooked together). Walls are white. There are several workstations, a few bench height. There is a GIANT paper cutter, and I wish I had a photo of that — the lever was raised, and no doubt you could butcher a chicken with its guillotine blade. Over the sink, the staff had arranged its kitchen implements (e.g. a tea strainer) on the kind of peg board you’d use in a workshop. Everything I saw was in its place and clean. Pinch me.

One the largest workbench was an arrangement of small rectangles of decorated papers and others of solid fabric, spools of linen thread and hanks of colored embroidery thread, and a few tools. On other workbenches were compositions of workshop supplies, one setup for each participant: paint brush, white glue, a cloth paper weight (like a bean bag), a linen wrapped brick, paper to protect the work surface, and paper to sew into a pamphlet.

first steps at making the case

Some people might get excited walking into a bakery or shoe store. The array of paper and the just-so placement of supplies made this heart beat faster. I also had one of those moments of thinking: It’s so awesome to work at a university. Everything good happens here.

One librarian introduced the workshop and described the purpose of the lab. It’s a “hospital” for the library, and they do both prevention and treatment. The staff also advises on disaster preparedness and disaster response. Honestly, I instantly felt that I was ready to change my occupation. ER for books, people!

Two bookbinders on the staff of the libraries conducted the workshop. We learned how to sew (or bind) pamphlets of blank pages with a simple decorative cover, and we learned how to make a book case — out of boards, a spine, fabric, and paper — and attach a text block, or a set of text sections, into the book case. 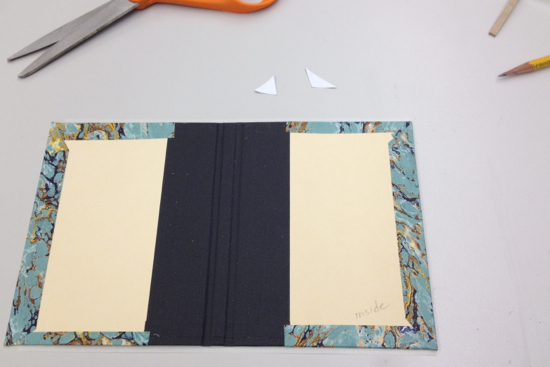 The workshop was designed in a deliberate sequence, and there would be a short bit of formal instruction/demonstration and then a longer time for us to work at our own station on the step of gluing, folding, sewing, assembling. The instructors were engaged yet low-key. There were no PowerPoint slides, no music playing out of someone’s iPhone, no costumes, no food.

All the pleasure was in the learning and doing, with space to think one’s own thoughts.

There were about 11 people in the workshop besides me. I recognized a couple of the students, and everyone else seemed to be undergraduate or graduate student age. Was there talking? I don’t think so, or, if there was, it occurred in murmurs that was absorbed into the ceiling tiles or HVAC flow. We were together, all working separately on the same task, all lost in our own thoughts and the concentration required for precise work.

The instructors floated, which is what Grace once told me that her second grade teacher would do while the children were working quietly at their desks. I asked a couple of questions and received help for one beginner’s mistake I had made (I overcut the corner of a piece of decorative paper — fortunately you can patch paper as easily as you can patch fabric).

small weight presses down on the text block, or two book sections sewn together

As a teacher myself, I am aware that we live in a time when there is a great demand for ‘creative disruption’ in education and at the same time a more traditional belief that a teacher must inspire or even goad students into learning. On the MIT course evaluation form, students are asked if a teacher “stimulates learning.” That verb “stimulate” suggests to me that a desire to learn a skill or subject comes from the outside — a teacher must bring it to the student. We try all sorts of things to do this: presentations, performance, eye contact, gestures, relevant assignments, and even (for some instructors) food and candy.

Pacing, therefore, may be as much a secret of stimulating interest as all the other features we instructors build in to a lesson. We often spend a lot of time optimizing the sequence and pace of our syllabi — do we do the same for one lecture?

Several years ago, when I taught at Mount Ida College, I was struggling with a class in which students were simply not finishing their drafts. They would write one page or two pages and peter out. Weeks away from the end of the term and the final paper, I started to worry that my usual method was not helping them actually do the writing — they were listening in class *about* writing (and reading) — but on their own they were not doing it.

So I chucked my plans for the last three weeks of class, and I designed a series of tasks in which we would, all together, write, talk, write, read aloud, write, and so on. If you had walked by my classroom in those weeks during one of the writing tasks, you would have found it to be very quiet, as though an exam were being held, and the teacher, sitting among the class, was taking it too. I could tell on the first day, however, that it was working, when one student, John, burst out at one moment, “This is so relaxing.” And this is a student who could barely write a page for his homework and in class would often be the one to blurt out “I don’t know” when a question was asked. Did he become a great writer in those last three weeks? He did not. But am I confident that he had an experience of sustained writing, which is what writing, and learning anything, takes? Yes. 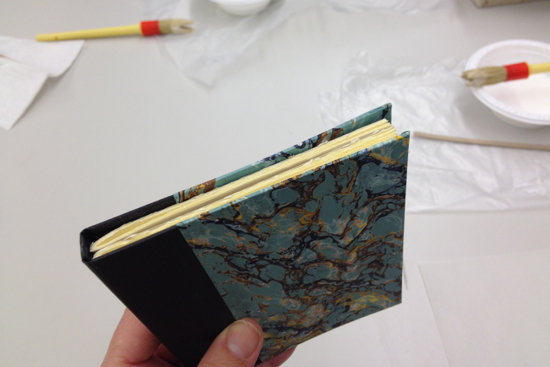 Learning often happens, I believe, in the quiet interstitial moments between instruction. Often, lectures unfold like shows, with the teacher as the star and the students the audience. Much of the learning may happen later, when students are working on problem sets, drafts, or team projects. This method has its benefits and can be effective.

But I personally love learning alongside others in moments of quiet. This happens in second grade, but it seems as though as students get older, the classroom time is often taken up by talking, lecturing, showing, and the quiet learning time happens elsewhere. I know that innovators like Salman Khan (khanacademy.org) are flipping the classroom, so that instruction happens outside the classroom and the quiet doing of work (math problems, for example) happens inside.

What I loved about this bookbinding workshop is that two important modes happened in the lab: some carefully chosen instruction with long periods of quiet learning.

There were no bells and whistles. The instructional materials were quite simple, even archaic. Was learning stimulated? You bet. And at least half of that heightened experience was happening entirely in my own quiet, steady, and passionate mind.

One thought on “Paper, thread, fabric, and glue: be still my heart”