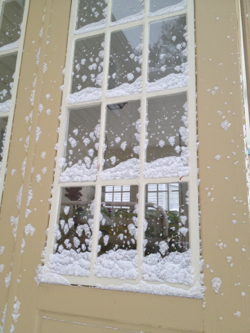 Today we put booties on the dog, bundled ourselves up, and ran around the neighborhood for 10 minutes. Every time the dog lifted his left and I saw his little penis, my crotch, which was well clothed, experienced a sympathetic chill. “Winston, you’re killing me!” I’d say when I could see he didn’t even have to go.  The cold air and wind were mostly exhilarating. It doesn’t bite when you are confident you’ll be home soon.

On cold days I wonder if the Ingalls family were ever warm in the winter, in the way that we are daily.

Once I read an article about people who live for a time at the research station in Antarctica. It’s regularly -30° F there, and even indoors they are never warm.

This morning on the phone my mother told me about a time she and my father, after we all had moved out, had lost power in a storm for about four days. They did everything they could to stay warm — putting on layers and a winter coat and getting under the covers was one method. She guessed the house had been about 50 degrees. One day they took the Sunday paper to my Aunt Elsie’s apartment in the city to stretch out the day. My cousin Joyce, who lived across the street from my parents and lost her power too, invited them over to enjoy the wood-burning stove in her family room. They had plans to sleep there when the power came back on one night around 10pm, and they went home.

The cold days remind us we’re lucky we have central heating, even though it is a commonality among everyone I know. Everyone.

Also today I’ve been reading The Invention of Comfort: Sensibilities & Design in Early Modern Britain & Early America, by John E. Crowley (Johns Hopkins UP: 2001). I picked it up while browsing in the used book area of Brookline Booksmith before Christmas. Before 18th century material comfort was in full swing, “comfort was primarily a moral term indicating personal support.” The 18th century “consumer revolution” in Britain and America “developed a culture of comfort that synthesized comfort’s new physical meaning with traditional ones of moral support.” Most notably, “satisfaction with a comfortable home became one of the most convincing ways to give meaning to consumption patterns.”

The comforts we enjoy today in our homes, that are minimal standards, went from being luxuries to standards in housing in early modern Britain and the first two centuries of America. Here are the chief ones.

Chimneys — reduced soot, allowed for attachment of ‘chambers,’ or private spaces in homes. Eliminated dangers associated with the open hearth in the hall, once the main room in medieval British houses.

Glazing — paned glass windows reduced drafts and increased illumination. (Although an “unquestioned good” in most historians’ view, the window also “implied a passive acceptance of natural darkness.”) In the 1798 Direct Tax Assessments, windows, even more than floor area or number of stories, added value to a house.

Parlors — common to the design of mansion houses, the parlor “sharpened the separation and distinctions among rooms in the house,” between rooms where work took place (esp. women’s work) and rooms where people socialized or enjoyed privacy.

Candles — Before the use of coal gas in the early 19th century, lamps and candles were the basic technologies of artificial lighting, and they were available “for only occasional use for most people most of the time.” Candle-making equipment was likely to be in wealthy households.  Highly-educated people regretted when they did not have, or did not feel free to use, a candle after dark to read. At least two candles per day were needed to have light after dark.

Eventually, “the conjunction of mirrors and candlelight accorded with a desirability for sheen and luster in interior decoration.”

Easy chairs — these were not originally designed for everyone’s comfort. They were designed for the ease of people who could not move easily on their own: men with gout, women in the last weeks of pregnancy, chronic invalids. They were upholstered, often had a raised foot rest, and sometimes had fitted chamber pots. Most guests still stood or sat in upright chairs when visiting.

Porch or piazza — these were first adopted in Early American housing because of their association with health and fresh air and later became prized necessities, esp. in the South, to enhance “climactic comfort.”

Umbrellas, beds, and Benjamin Franklin (for bringing scientific enlightenment to architectural concerns) are also important topics in the book.

If you are a student of British or American history, or you enjoy reading novels from 18th century British or American authors, you will really enjoy this. So many good facts. There are illustrations and quotations from contemporary books, with insightful and relevant commentary from the author. The final chapter showcases the rise of the home design book, especially in America, following a housing boom. The two most widely-read authorities were Catherine Beecher (1800-1878) and Andrew Jackson Downing (1815-1852). Professional authors, Beecher’s book was a housekeeping manual, which advocated for home designs that made such work more efficient, and Downing’s an architectural treatise with an emphasis on aesthetic issues.

Beecher thought of the house from the experience of working in it, and she concerned herself with the multipurpose use of domestic space for house work. Downing gave priority to male leisure and the symbolic important of the house’s external appearance.

The home is as much a place for work as it is for leisure. I’d say, too, that a lot of work and natural resources go into creating comfort for ourselves and the people we live with. 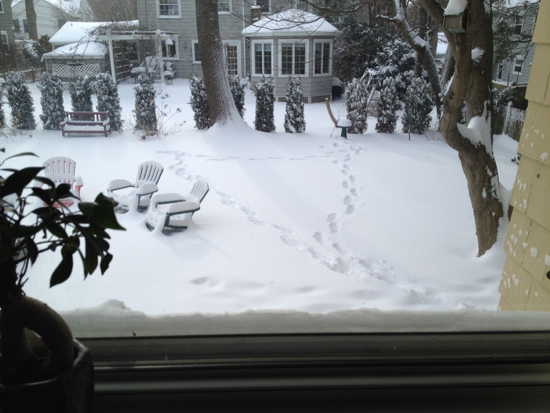 4 thoughts on “Tidings of comfort”