On Sunday, my friend Betsy and I did some consumer research, by sitting through the 4:50pm showing of Mamma Mia!, the movie version of the Broadway musical based on the ABBA repertoire.

We did this so you don’t have to. It is possibly the worst movie I have ever seen, or it may be tied for worst with Baby Geniuses.

MM is not even interestingly bad, and it’s not even worth the price of the summer afternoon treat of sitting in ice-cold air conditioning. Betsy and I frequently cringed in sympathetic embarrassment as the normally talented Meryl Streep or Pierce Brosnan belted out a song and emoted in their close-ups. (Worst: when the close-up occurred as one was singing! Pierce, how could you?)

As Betsy and I, both in our early 40s, grabbed each other’s elbow and winced at clunky scenes, two women in their 30s stumbled over us on their way out, halfway through the show. In the row in front of us, women over 50 sniffled and wept as Donna, the Meryl Streep character, sang “The Winner Takes It All” with her blonde hair extensions and red silky cinematic scarf swirling around her face and professionally-slim figure.

It’s a Baby Boomer fantasy, and a hetero one, too, as James reminded me, when I warned him and Doug, who know their theatre, not to see it. Indeed, my intelligence was insulted by the coy, easy-to-miss glance used by Harry, the Colin Firth character, to signal his sexuality late in the movie during a chaotic dance number in a stone church on the top of a craggy, picturesque hill. (Colin, how could you?) When the two youngsters — Sofia, Donna’s 19-year-old love child, and Skye, her fiance — decide at the altar not to get married so they can “see the world instead,” Donna and Sam, the Pierce Brosnan character, decide even more spontaneously not to “waste a good wedding,” and they link up instead.

Disappointingly, there aren’t even any good movie kisses here, between the kids or between the so obviously young at heart.

Someone — Jimmy’s mother? — asked me earlier this summer if I had noticed the rise in food prices. I hadn’t, but then I started paying attention. Wow. Between Betsy and I, we spent $16 for two tickets to a film made only to take our money.

As I sat eating my breakfast today, I realized that I could buy four boxes of this cereal for the same amount, with a few pennies to spare. 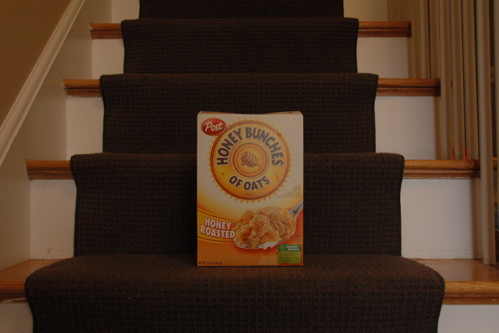 At $3.99 per box and only 6g of sugar per serving, it’s less expensive and cloying than sitting through Christine Boranski, Meryl Streep, and Julie Walters singing “Waterloo,” in Elvis-like (or is it Elton-like?) get-up over the credits.