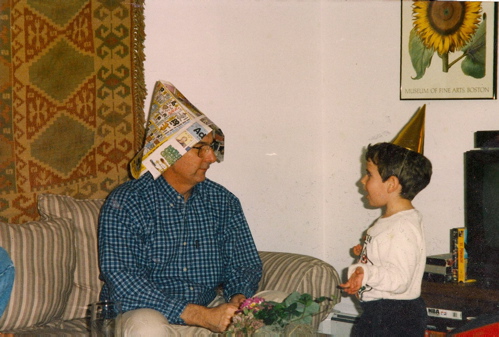 That’s a photograph, taken with a film camera, of my father, Stephen Kokernak, and my son, Eli Guterman, at the Harvard Square apartment of my sister Emily and her then boyfriend/fiancé. My father made the comics hat on his head to entertain Eli; he made hats like that for us when we were children. Eli seems to be having one of his frank talks with his grandfather. I look at the picture and can hear his little voice: “Grandpa…”

There were other people in the room: my mother, my brother Michael, Lydia, Emily, and Emily’s boyfriend, Stephen Ward, a “Steve,” too, like my father. Perhaps members of Steve’s family, from Gorham, Maine, were there, too; I met them there once — they were clannish, like the Kokernaks — but I don’t remember if this was that time. All those times at Emily and Steve’s place roll into one large, peopled, and good memory.

It would almost be possible to get everyone together again (in a new room, though, because the apartment has been passed along). All of us — I and my family, my parents, Emily, my three other siblings, Steve’s mother and siblings, his nephew — would be 12 years older. There would be new additions to both our families.

I’m not certain, though. Steve is gone, we’re not in touch with his family, and I don’t know who makes up the Ward clan now.

Emily and Steve broke up some time after this; I don’t recall when. Why they disbanded is Emily’s story to tell — I can say only that it seemed to be for an accumulation of the kinds of slights and hurts that break people up, and not a drama.

Had I thought about Steve after the break-up, and before September 11, 2001? Not much. But then Emily called in the middle of that astonishing day and introduced a set of concrete and weighty nouns that consolidated the horror and made it more terrifying: “Steve,” “new job,” “two weeks,” “New York,” and — a code we suddenly knew the definition of — “Cantor Fitzgerald.”

And then, after Emily’s call, I am standing in front of our blue couch, on which are piles of clean laundry, waiting for folding. I hold a towel, a pillowcase, and I stare at their angles and wonder why folding matters. I stare at the wall; it’s white, like a screen. I picture Steve, whom I haven’t seen in a couple of years at least, in an office with cubicles — some anonymous yet familiar office. I see him, early to his desk, looking up when footsteps approach and grinning and saying “Hello!” when one of his many new co-workers and future friends approach his desk. Already they like him, this young guy from Maine in his light brown suit — I picture Steve in a light brown suit even though, in all the time I knew him, I never saw how he dressed for work — because he is sincere and open and instantly likeable.

Time keeps switching on me, like a door or shutter is opening and closing and opening: past, present, past, present, past. I think of Steve, the first time I met him. Emily was babysitting for Eli and Lydia at our apartment in Brookline Village. I came home (Jimmy was away); it was a wet but warm night. Emily and I stand on the front steps for some reason, and here comes Steve down the wet street on his bicycle. He liked Emily — why shouldn’t he foolishly ride his bicycle all the way from Cambridge to see her? He was in his 20s then, but as earnest as a teenaged boy.  And as guileless.

And friendly, and talkative, and thoughtful in a practical way. Emily reported that, shortly after they first started dating, he left the apartment that Emily shared with Sally and came back with garbage bags, because they didn’t have any. He also brought Sally a shake from McDonald’s, because already he knew what the sister liked.

He liked me, my husband, my children, my parents. He was physically strong and gave Eli and then Lydia airplane rides in his arms, until they were on the verge of fear.

Down-to-earth, once he admired a nifty $7 cheese grater I had bought at TJMaxx and, when I bought him an identical one, he gushed sincere thanks. He used it. (I still have mine.)

From Emily I knew of his devotion to his family: his brother, his sisters, his mother, his father, nephew Sean. While he was not a pillar of virtue, he seemed to be a pillar among them: Lean on me. They leaned, and they loved him.

How was it for them that he moved to New York?

In my imagination, which on September 11th locked on Steve and zig-zagged between memory and dark fantasies, I mind-traveled to his office and among cubicles and moved in closer: I sat in Steve’s chair at his desk. I looked at the stapler, the printout, the screen. Wow, I’m in New York, I imagined Steve feeling. This is big, the boy from small-town Maine, in Manhattan after a long detour in Boston. Steve was not sure he was ready, but — I imagined, although I didn’t know anything — he was determined to make himself ready.

After we started to hear on the radio the details of the crashes, explosions, collapse, confusion, inferno, I pictured Steve: standing, coughing, hot, crazed, directionless. Trapped but couldn’t stay.

And I pictured him in Cambridge, in the Harvard Square apartment, in the tiny bedroom with Emily, with a cap on his bald head, at the fridge, with a beer, on his bike, on the couch, smiling.

In his life, he smirked at Emily, too, which I heard about but never experienced, and suddenly the hugeness of the event made all of his infractions so slight. So slight.

He was the guy again who vowed to eat more vegetables and was grateful when I sent him the list, clipped from a magazine, of 10 easy ways to get your vegetables. “Salsa” was maybe first on the list.

Every time now I eat salsa I think, crazily, of Steve.

I also think of Steve when I pass by the old Harvard Square apartment, at the corner of Mount Auburn Street and Ash.

I think of him when I see the sign in our neighborhood, dotted in front of this house or that: Steve Ward Realty.

I think of him, and his mother and sisters and brother and father and nephew and niece and all the people in Gorham, Maine, on September 11th, or at other times of the year when someone drops that shorthand: “nine eleven.”

In the fall of 2001, after Steve’s death was confirmed and he appeared in the New York Times’s “Portraits of Grief,” I was driving the car one day and on the radio came the opening guitar lines of Guns N’ Roses “Sweet Child of Mine.” Something in the sound got to me, like a finger was working its way through my skin and between two ribs and was touching a button inside, and, after the drums slammed in, I started to cry. This thought overtook me: There is so much beauty in the world, beauty like this guitar sound, and Steve Ward will never know it again. He will miss it all.

That’s crazy, isn’t it? I don’t even know if Steve was a fan. Suddenly, the song became his. The guitar line, especially, his.

And maybe that’s what death and violence — the terrible, the ugly kind — do to us: make us know beauty, its ephemerality, piercingness, and loss.

I don’t miss Steve, for myself, but I do miss for Steve the beauty that was still to come: of autumn in New York, of new friends, of falling in love and staying, of more children in his life, of the Red Sox winning the Series, of his nephew’s high school graduation, of beer and food and new restaurants, of snatches of songs that stay with you, of old girlfriends on Facebook, of trips back to Maine, of someday lying awake in bed at night, years from now, and looking back on the beds and rooms and cities and people that he knew and having the luxury to itemize his regrets and fleeting moments of happiness, too.

—–
Steve Ward’s profile in the New York Times Portraits of Grief, which commemorated the losses of September 11, 2001, is here: link.