Rich, my neighbor — husband of Julie, father of Georgie, and looker-alike of this guy — walked by and asked me if the sunflowers were ready to be harvested for seed. 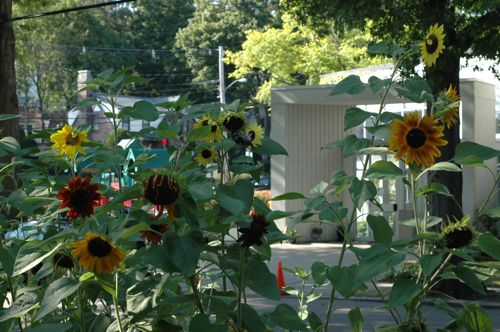 However… “I decided not to harvest them,” I replied to Rich, “and that I’d leave them for the wildlife.” I told him about a Downy Woodpecker and other birds that were feeding obsessively on the seed heads. 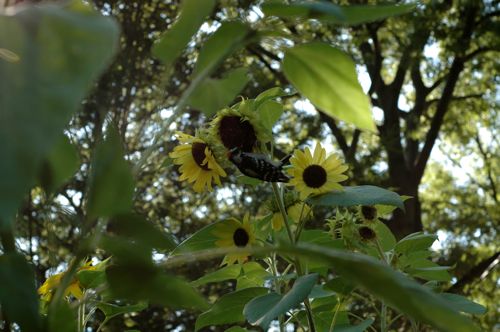 It also seemed that there was other local wildlife interested in harvesting those seeds: Grace and Georgie. Later, as I poked around in the yard, they asked me if they could cut some down and get the seeds. I said, “yeah, but you can’t eat them.” Their countenances suggested I had offended their intelligence: “We know.”

The two of them went to work, cutting down mostly spent sunflowers and cracking open the seed heads.

Then they strafed them.

And then they picked them over for seeds. 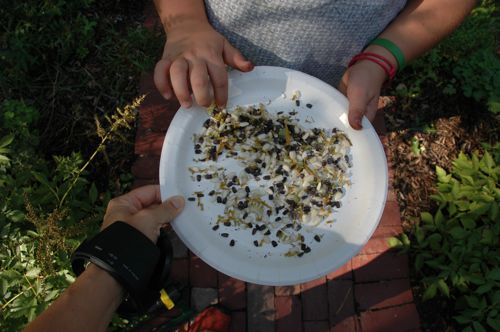 George asked me, “Jane, can we plant these?”

I answered, “Well, okay, but I don’t think they’ll have time to grow into flowers before winter.”

George seemed unbothered by this. “That’s okay. We want to be like Miss Rumphius, and plant flowers everywhere and make the world more beautiful.” (Miss Rumphius, too, has to wait over a long winter for her lupines to grow.)

I suggested that they broadcast the seeds along the berm between the road and the sidewalk, up and down the street. They scattered some in our front yard and Georgie’s front yard, too.

Meanwhile, I cut down and bagged (for town composting) the deadest flowers: the Teddy Bears that I planted along the front. To me, they somehow evoke the land of the dead in Philip Pullman’s The Amber Spyglass: a gang of the upright and grim. 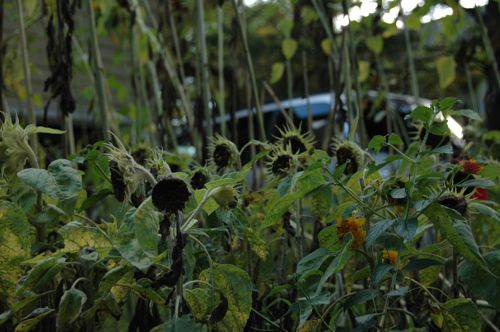 Earlier, Rich asked me if I intended to plant sunflowers again, next summer. I had been thinking quite a bit about this, what to do with the bare patch in 2010: more sunflowers, grass it over, a tree, tomatoes? I had decided on potatoes. They’re food (my favorite one); they grow underground (away from bunnies); the foliage and flowers are reportedly quite attractive; and, for all my effort, they would yield something useful.

Rich accepted the potato decision and added: “I liked the sunflowers.” And in that instant of good-but-not-gushing feedback, I revised my decision and future plans.

“I think I’ll plant some sunflowers, a row of them, alongside the potatoes.”

And so one experiment will fold itself into the next.