This is the fantasy, or at least one of them: to gather and destroy an archive of excessive notes, dead-end projects, and magazine clippings that I saved over a long period of time because I believed they would coalesce somehow into knowledge or inspiration. They failed to (not I failed to), so the whole collection, even though it is a collection only because I collected it, must be deleted so I can be relieved of the burden. 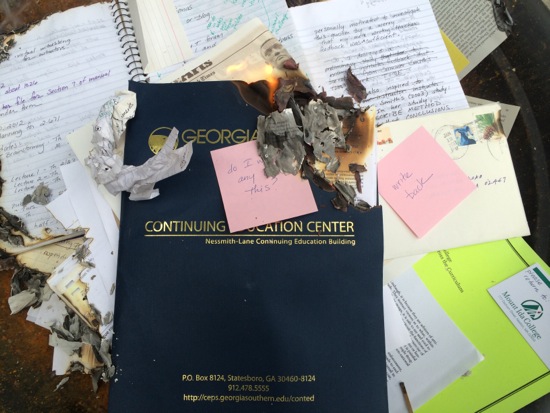 Do you know this fantasy, this feeling?

Harold Bloom, in Anxiety of Influence (OUP, 1973), looks at a series of hierarchical relationships between male poets, and sees younger poets as sons seeking to master, surpass, and even overthrow the older, established male poet/father. To simplify: the younger poet must do more than supersede the older poet in order to make a space for his own creation; he’s gotta take him down.

I wonder if a person must dispose of part of her own past (unprovocative though that past may be) to make room for her own future work and even relationships, projects, and pleasures. The artifacts of the past can own us — no, obligate us.

In the garage at my house there were two brown paper grocery bags and one box full of notebooks, files, and conference folders that I had packed up in June when part of the writing & rhetoric program at MIT moved from an administrative building about to be knocked down to make way for MIT.nano, a new nanotechnology research center. (See?) Instead of just sending these materials over to my new office, I set these aside to look at more closely and evaluate whether they had any present-day use. Finally, around Christmas, that holiday of acquisition, I examined them quickly, and as I did I tossed each piece into our backyard bonfire receptacle, wanting to get rid of them as quickly as possible, so that I wouldn’t have to read every word — whether mundane or profound — I had spent years writing, most of them in meetings (not, unfortunately, in the solitude of real writing, the kind that makes something). These were just records: of dates, obligations, lists of names, lists of grades, ideas, modifications, minor decisions, and bureaucratic dialogue. I also did not want to read again the handouts I had collected at conferences, or the articles I once taught in courses I will never teach again.

There were post-it notes here and there, the last layer placed on top of layers and layers of sediment. In one I asked myself, “Do I want any of this?” And in another I chided myself to “write back.”

I saved, but did not want, any of this. I did not write back.

It was a cool day, overcast, the ground frozen, so after I filled the bonfire kettle to the brim, I lit a match and then another. Breezes puffed them out. I used a handheld igniter and managed to get a flame to start eating the corners of paper here and there in the pile. They raged then just as quickly petered out, leaving blackened and flaky edges, but with most of the text still readable; only the corners and margins of paper were destroyed.

I tried lighter fluid, squeezing big squirts of it diagonally over the pile, and I threw lit matches down until ribbons of flame criss-crossed the covers of notebooks and folders and the random leaves of paper.

The top layers burned, and as I watched the action of the flame, it seemed to highlight words and paragraphs briefly, bringing them to my attention for the first time in years:

personally motivated to investigate this question by a worry that my writing-teacher feedback was insufficient.

They instruct viewers as to what, —

I tended them, but the flames went out again. Although the papers were all dry, they had been pressed together for a long time, squeezing out the oxygen needed for a hungry fire. The mass smoldered, the outer layers destroyed of their meaning, the inner block of pages still holding onto words and full sentences, though I couldn’t get at them. The impartial destruction bothered me; it wasn’t done, as if the remaining records would be forced to hang around with me, a persistent burden.

A stock pot full of water finished the job. Floods destroy paper too. I felt unsatisfied with the results though. I had wanted that paper to be reduced to smithereens, to molecules, to cellulose dust carried by the breeze over the garden to rest all winter on top of the mulch, blanketed by snow, soaked by the spring thaw, and composted down into the soil. I had no spiritual urge for the waste to fertilize my hydrangea and clematis and heuchera. I just wanted it disappeared but it ended up a heavy mess in a trash bag.

For a few days, yes, I did feel regret and doubt. Would I someday want those old notes? Could I image a future me who would want to look nostalgically over the artifacts from her first years, her hungry years, at MIT? How would I write a memoir about being a teacher without material, without evidence??

Regret faded. It helps to flip through my notebooks from this academic year and see mundane notes to myself:

tutorial: what do we want to see change?

late proposals get marked down a third of a letter grade

This isn’t art. It’s not even wisdom. I wrote this stuff down so that I would pay attention and it would stick in my head. If it mattered, I acted on it at the time. And, of the rest? If it had weight, it’s likely that it sticks in my mind somehow, and it may prick and pester me even if it no longer materially exists. And if it didn’t have weight, it really is gone now, and I will live with its goneness.